Human rights groups and activists and social media users have denounced as unjust the ruling of a court in Tunisia which sentenced three people aged under 30 to 30 years in prison each on cannabis (local: Zatla) use charges. The critics of the ruling also called for amending the Law 52 on which the court based its sentence.

Possession and use of cannabis are both illegal in Tunisia, in accordance with the 1992 Narcotics Act. Prior to 2017, Tunisian drug laws were notoriously harsh, with people caught with even small amounts sentenced to a mandatory one to a maximum of five years in prison. This was in addition to a fine of 1,000 to 3,000 Tunisian dinars (roughly €300 to €900). >>

Law 52 imposes a minimum mandatory sentence of a year in prison for anyone who uses or possesses even a small quantity of an illegal drug, including cannabis. Repeat offenders face a minimum sentence of five years. Even in cases involving possession of a single joint, judges lack authority to impose alternatives to incarceration, such as community-based sanctions or other administrative penalties. >>

In 1992, the Tunisian government enacted Law 52, which strengthened drug criminalization and imposed harsh mandatory prison sentences. For simple possession of small amounts of marijuana, a first-time offender was to receive one to five years and a fine between $400 and $1,200. Those charged with growing or distributing narcotics faced six to 10 years with a fine of $2,000 to $4,000. Those linked to smuggling groups faced mandatory sentences of 20 years to life, in addition to fines ranging from $40,000 to $400,000. >>

In Tunisia, the government doubled down, passing a law in 2015 reaffirming Law 52. >>

On March 15, 2017, Tunisia’s government issued regulations allowing judges to pardon defendants as soon as their judgment is announced so that prison time is avoided. Law 52 was modified — and judges now have discretion in sentencing for the first two drug offenses. They can consider mitigating circumstances and recommend alternatives to prison, such as medical evaluation and treatment. On May 15, 2017, a criminal court in Tunisia handed down the first modified sentence: a suspended prison sentence of one year and a 1,000 TND fine. Human rights groups and civil society activists commended the change but also endorsed further changes, arguing that judicial discretion has its own limitations and risks. >>

The law also forbids the cultivation of cannabis, either for personal or medicinal purposes. Cultivation is regarded as a serious offense (as serious as sale or supply) and is subject to the same sentencing. >>

Cannabis contains over 500 constituents. The most important of these are THC (Tetra-Hydro-Cannabinol) and CBD (Canna-Bi-Diol), which both belong to the cannabinoid group. Unlike THC, CBD does not make you high. It does however offer great medicinal potential. Tunisian law makes no distinction between cannabis and CBD; despite the fact that the latter contains very low levels of THC. As such, it is illegal to purchase or sell CBD oil in the country, even if it’s intended for medicinal purposes. >>

Using cannabis for medicinal reasons is illegal, and the government shows no signs of changing this law any time soon. >>

Despite these severe sentences, drug trafficking is still common in the country – largely due to the import of hashish from Morocco, via Algeria. >>

… civil society organizations highlighted how Law 52 targets young men from marginalized communities — and called attention to the economic and social costs. Often, those with past drug convictions — however minor — have no path toward reintegration into the Tunisian workforce. >>

By the end of 2016, Tunisia housed over 23,000 prisoners — while the official capacity of the Tunisian prison system is an estimated 18,000. One-third of these prisoners are there for drug offenses — and the majority of drug cases involve young men caught with small amounts of marijuana. In 2016 alone, over 56 percent of those arrested were detained for drug use, primarily cannabis. >>

In the Middle East and North Africa, penalties associated with the possession and use of cannabis remain harsh given global movement toward depenalization. The death penalty is allowed for drug offenses in 14 of the 19 countries in the region (though only a handful of those countries regularly carry out such executions). Like Tunisia, many countries also experience prison overcrowding. >>

The decision to use drugs, like the decision to consume alcohol or tobacco, is a matter of personal choice and an exercise of an aspect of the right to privacy under international law, a cornerstone of respect for personal autonomy. Limitations on autonomy and the right to privacy may be imposed, but are justified only if they meet the criteria of legitimate purpose, proportionality, necessity, and non-discrimination. The criteria of proportionality and necessity require governments to consider what means are available to achieve the same purpose that would be least restrictive or pose minimal interference with respect for and the exercise of human rights. >>

As of December 2015, 7,451 people were prosecuted for drug-related offenses in Tunisia’s prisons, and 7,306 men and 145 women, according to the Justice Ministry’s General Administration of Prisons and Rehabilitation. Drug offenses represented 28 percent of the total state prison population. >>

It’s believed that cannabis came to Tunisia at some point between the 9th and 12th century. It was certainly being used in the 1500s, until it was made illegal. >>

The mean age for starting substance use is 17 years and older. >>

According to a study from Northern Tunisia and Greater Tunis, cannabis is by far the most widely used illicit substance, followed by the use of psychotropic drugs, including benzodiazepines and trihexyphenidyl. Of all drugs being consumed, cannabis has risen to a dominant share of 96.89% in 2014-2015 (compared to 84% in 2010-2011). >> 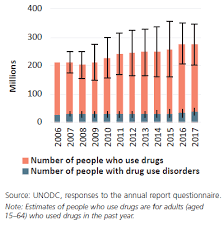 People who initiate drug use and subsequently develop drug use disorders typically transition through several stages, from initiation of use to escalation, maintenance, and, eventually, dependence or addiction. >>

There is an association between drug use disorders and social disadvantage, including low educational attainment, increased difficulty in finding and remaining in employment, and financial instability and poverty. >>

However, the heterogeneous institutional design in this field of policy, in which the Ministries of Health, Justice and Interior play a major role, yet in an incoherent and uncoordinated manner, result, beyond others, in a missing base of solid data. >>

Cannabis the most used substance, opioids the most harmful. An estimated 192 million people used cannabis in 2018, making it the most used drug globally. In comparison, 58 million people used opioids in 2018. accounted for 66 per cent of the estimated 167,000 deaths related to drug use disorders in 2017 and 50 per cent of the 42 millions years (or 21 million years) lost due to disability or early death, attributed to drug use. More than 11 million people inject drugs, while 1.4 million PWID are living with HIV, 5.5 million with hepatitis C and 1.2 million are living with both hepatitis C and HIV. >>

This website is built with WordPress and uses Google Fonts. Please check on the cookies we use!
infookdetailsManage consent
Manage consent

This website uses cookies to improve your experience while you navigate through the website. Out of these, the cookies that are categorized as necessary are stored on your browser as they are essential for the working of basic functionalities of the website. We also use third-party cookies that help us analyze and understand how you use this website. These cookies will be stored in your browser only with your consent. You also have the option to opt-out of these cookies. But opting out of some of these cookies may affect your browsing experience.
Necessary Always Enabled

Any cookies that may not be particularly necessary for the website to function and is used specifically to collect user personal data via analytics, ads, other embedded contents are termed as non-necessary cookies. It is mandatory to procure user consent prior to running these cookies on your website.